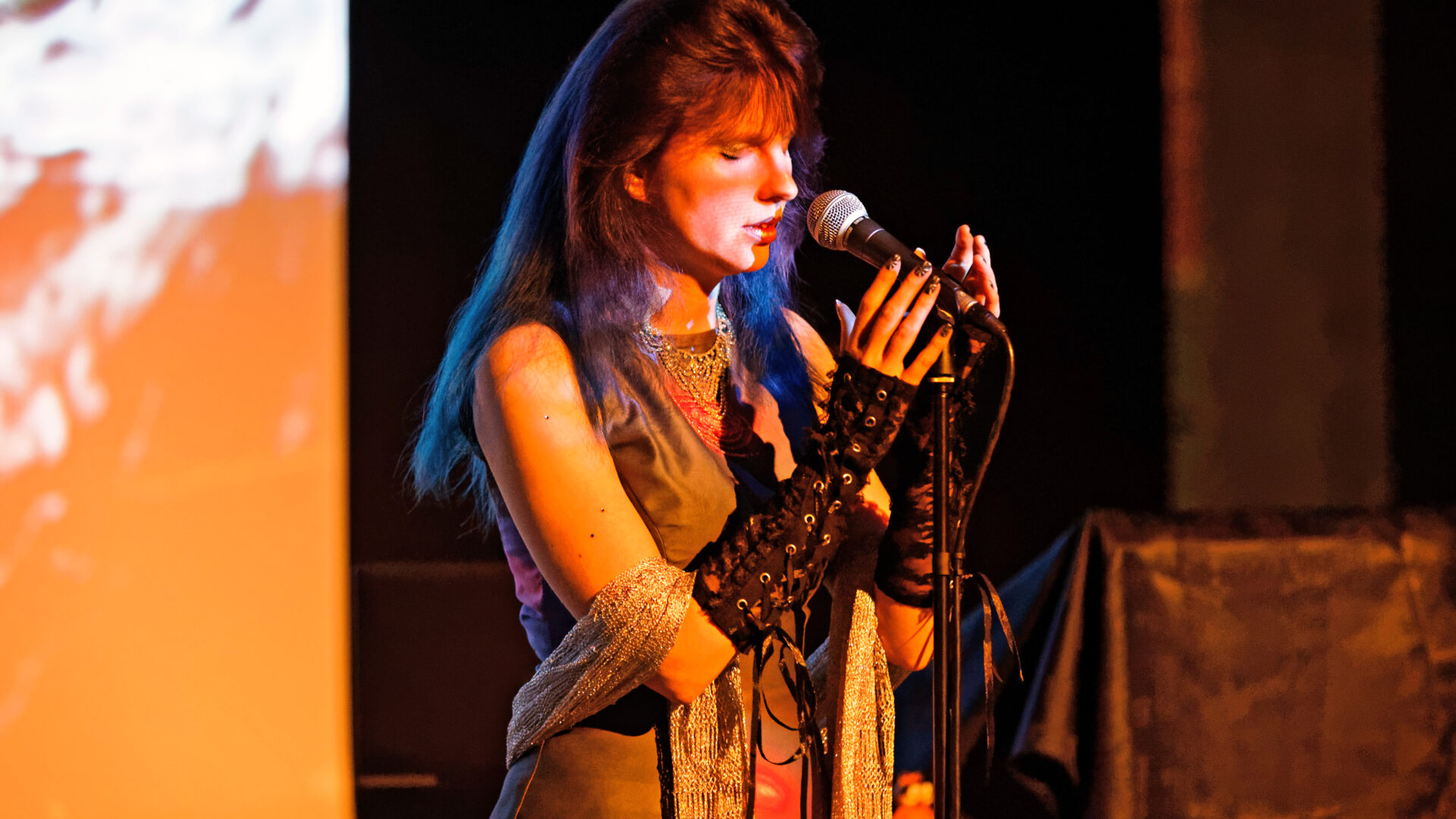 Carys is a singer songwriter based in Suffolk with an enthusiastic and evocative stage presence displaying a natural charm that has won her many admirers, not only within the folk scene, but also far beyond it.

Her musical partnership with UK synth veteran David Wright and the avant-garde rock band Code Indigo have won many plaudits from fans and media alike. The CDs ‘Take the Money and Run’ and the critically acclaimed 2017 release ‘Prophecy’ were followed by a series of successful UK and European concerts, including two nights supporting the German music legends Tangerine Dream.

Carys has autism and anxiety disorder and she came to realise that her mind has a unique way of producing some interesting songs. Her first solo album ‘A Different Kind Of Normal’ certainly reflects that with its roots firmly in folk, but also dipping into rock, pop and em. And as she explains with a smile when discussing the album; “The title describes me perfectly”. She released her second solo album “WolfSong” during the first lockdown in Spring 2020.

Her continued involvement in folk music includes many local events and folk sessions. Together Carys and singer Rosemary Griffith form the duo Celandine, releasing their CD ‘She’s Like the Swallow’ in 2015. Beyond this, Carys has created “Max the Pirate Cat” who features in both song and story.

Carys is a unique talent, beautifully interpreting her own composed material and traditional songs alike as well as showcasing her beautiful and evocative vocal textures within ambient electronic music.

Okay, so much for the official bit. Aged Two: Carys decides she wants to be a cat.

Aged Three: Carys makes first recording. The studio engineer is her mother; recording her singing “Go Tell It On The Mountain” on a reel to reel tape recorder. With any luck, this will never, EVER see the light of day. It is, however, remarkable due to the completely out of time clapping. Oh, and the fact that Carys could sing in tune at the age of three…

Aged Nine: Carys joins school choir. Discovers she can sing louder than anyone else.

Aged Eleven: Carys realises for the first time that boys and girls are not equal when she overhears a fellow student telling the only boy in the school choir that he’d get the lead in “Sweeney Todd”. Carys thinks this is patently unfair because she can sing the whole part perfectly so why shouldn’t she get the chance to try out?

Aged Sixteen: Carys decides she wants to sing professionally. Ideally, she would have chosen to go back in time 14 years and become one of Abba’s backing singers. Sadly, as time travel has yet to be invented she never quite managed this.

The Random Bit In The Middle

Carys’s musical theatre roles have included Florence in “Chess” and Jane in “Salad Days”. Theatrical roles have included Puck in “A Midsummer Night’s Dream, Elizabeth Proctor in “The Crucible” and The Angel Gabriel in her playgroup’s nativity when she was three. She has also directed various variety shows and pantomimes, and co-wrote a panto script with her mother in 2011, in which she was musical director. At the end of 2010 she met Rosemary Griffith and they formed the folk duo that would later become known as Celandine.

In May 2012 Carys auditioned for David Wright, who was looking for a vocalist for concert and possible recording work. 9th June saw their first concert together, sowing the seed for pretty much everything that has happened since.

In November 2012 her song “An Honest Man” was featured in “The Story Behind The Song” on FolkCast, one of the largest European folk podcasts.  She spent much of 2013 concentrating on live performance, including Folk at the Boat in Ipswich and the ‘Flaming June’ buskers stage at Folkstock. 2013 culminated with the release of her festive single “At the Turn of the Year”; the video of which can be found on her youtube channel.

in 2015, along with David Wright and Robert Fox she co-wrote and performed vocals for “Dreaming Desire”. The track, subtitled “A Symphony for Synth and Voice” appears on David’s 2015 album “Beyond the Airwaves Volume Two”. Later that year Celandine launched their album “She’s Like the Swallow” at the Soapbox stage at FolkEast. They also appeared live on Felixstowe and West Norfolk radio.

During 2016 David Wright and Carys began working on a track which got longer…and longer! What started as a 15 minute piece grew into an entire album, and thus “Prophecy” was released in March 2017. Promotional concerts in the UK, Germany and Norway followed. Autumn 2017 also saw Code Indigo supporting Tangerine Dream in the Netherlands.

Carys released her debut solo album, A Different Kind Of Normal following a successful crowdfunding campaign. Described as “an album that crosses folk, rock and progressive boundaries” and “an album filled with surprises, a beautiful production quality, with classy arrangements”; the album gained her many new fans. 2019 saw performances throughout the UK both solo and performing alongside David Wright, including Cropredy Festival fringe and Gone to Earth festival.  Also worthy of note is the hand-drawn video of “Max the Pirate Cat”, a year in the making. At the close of the year, Carys had a full calendar for 2020 together with plans for a second solo album.

Then the pandemic happened.

Despite the UK being in full lockdown Carys released her second solo album “WolfSong” in May 2020. Described as “a riveting album”,  and “proving herself to be a singer of supreme story telling ability”. Her launch gig took place live on facebook; as yet Carys hasn’t managed to perform to a live audience larger than 5 people!

The latter half of 2020 saw another crowdfunding campaign, this time for the hardbacked book of “Max the Pirate Cat”. 100% funded in the first 24 hours, the book sold out a week after release. Carys plans to release a paperback version during 2021. When Carys is not singing she designs and makes her own costumes, writes things or sleeps. She has written several unpublished novels and one self-indulgent unpublishable sequel (to John Wyndham’s “The Chrysalids”). Sadly, after the initial writing she convinces herself that it’s all terrible and has thus far completely failed at editing. She has a degree in Biology and Earth Sciences from the Open University because it was really good fun to play with microscopes and fossils. In her spare time she has a cat, a dog and a day job.