A Different Kind Of Normal is HERE!

It’s here – and I suddenly have writer’s block and can’t figure out how to start this post. However, given that this has never stopped me before, I shall randomly start writing and see what happens. Firstly, here is a VERY IMPORTANT LINK which you should definitely click!

I should probably talk about Friday evening. My only real mistake was forgetting to organise anyone to take photos! So I’m very grateful to friends and fans with phone cameras, otherwise this would be a photo-less post! (Is photo-less a word?) Anyway, this montage is by my sister-in-law Leanne. 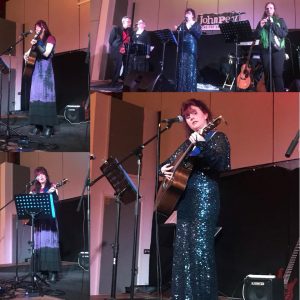 I’ve just realised a title would probably be a good idea.

A Different Kind Of Normal – Album Launch, First Half!

The evening started with Keith Sadler…actually no, lets go back a bit further than that. It started when I first saw the CDs at a little before 5 in the afternoon! This left just enough time to unwrap some for my backers who I knew would be at the launch, listen through one to make sure there weren’t any exciting little errors like track 7 being repeated 6 times, and put the cakes in the car. Actually, the cakes aren’t strictly relevant, now I come to think of it. Also, wouldn’t it be funny to have an album where track 7 really did repeat 6 times? Imagine everyone’s confusion!

Anyway. I watched most of Keith’s set from the “green balcony” which isn’t really a thing but it should be. (The John Peel Centre doesn’t yet have a Green Room, but performers can watch from the balcony which gives a great view not only of the stage but the entire audience). I really enjoyed his songs as always, and I’m really pleased to hear he’s planning another album for this autumn.

Next was…me! I’m not sure what to write about this, so I shall start with the running order for those who are interested in such things:

This was the acoustic set, and I thoroughly enjoyed it – and I think the audience did too! Rosemary Griffith (the other half of Celandine), joined me onstage for “Rewritten”, but my favourite was undoubtedly “13”. This is actually the title track of the album, though calling it “A Different Kind Of Normal” would have been far too normal, wouldn’t it? I wrote it about what it’s like to be inside my head, despite swearing a couple of years ago I would never write an autobiographical song! 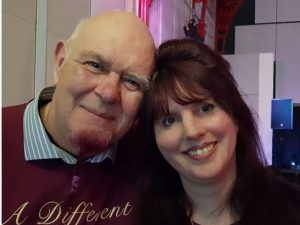 In which homemade chocolate fudge cake, random plain cake with yellow icing and purple glittery sugar on top, and gluten-free vegan chocolate brownies (all made by me) were consumed; t-shirts and CDs were purchased, and this photo was taken by Robin Sermon, of me with Ian Ralph Huckin.

I should probably also mention the t-shirts, which you can almost see in the photo. Is it daft that I’m more excited to have a t-shirt with my name and album title on it than I am a CD full of music I’ve written? Yes? Oh, okay then…

A Different Kind Of Normal – Album Launch, Second Half!

Anyway, Triangle started the second half. I have to confess I missed a fair bit of this due to covering my face with glitter and changing into my dress. The dress also needs a mention, because it’s called…Carys! I found it on the Debenhams website sale while I was trying to find suitable bridesmaid dresses for my mother and stepdad’s wedding, and got very excited that there was a dress named after me. It’s even more exciting because it was designed by Jenny Packham, sister to Chris Packham who also has Aspergers. Well I like the synchronicity of it anyway.

For the second half David Wright joined me onstage (it feels very strange to put it that way around!), we used backing tracks, and the running order looked like this: 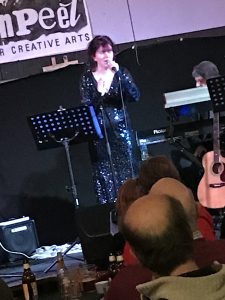 The high points here were…all of it! For those of you who haven’t heard “Apocalypse Dreams” yet, its a 10 minute prog track and the song I’m most proud of. I was a bit nervous about performing it live (not least because I’d never sung it live before) but…it worked! Then things got interesting. Due to a bizarre double glitch, we had no backing track for “The Piper”, so Triangle (with Sophie on whistle) and I performed it acapella and completely unrehearsed! Nobody got up and left, so I think we got away with it..!

For “Sir Dominick’s Bargain” and “Fountains of Hope” my stepdad Mike joined us onstage. This was actually the first time we’d ever performed together and I had to work hard not to get emotional. It was hard to realise that the evening was almost over, and all too soon it was time for the final song. “Beating the Streetlights Home” is actually a Celandine track, so Rosemary joined me onstage again. This photo was take by John Whittaker – you can just see David Wright behind the synths!

So, fast forward to Monday. All my backers’ albums and perks (with one exception, Anton!) have been sent out, I’ve been receiving lovely messages all day from people who have got their CDs, cards and scarves, and I’ve already received the best review I shall ever have, via my sister-in-law Leanne, who was playing the CD in the car this morning with her daughter. Here it is:

My niece is three and a half years old. ❤