Once again it’s been a reasonably productive day, though I didn’t set an alarm this morning. I decided last week that I wasn’t going to fall into the trap of waking up late and not doing anything until after midday, but after Day 1’s 2am bedtime I needed to catch up on sleep. Unfortunately, Little Orange Dog had other ideas… She first attempted to wake me at 7:30 (without much success) but two hours later her snooze function had malfunctioned, forcing me to get up and feed her breakfast… 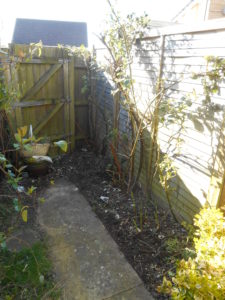 Today’s exercise consisted of pruning and reshaping the blackberry bushes in the garden. I dug up all the little ones growing by the path and replanted them by the fence. Then I found some ancient potatoes that had sprouted so I shoved them in the ground as well. Hey, they might grow… Granted, this isn’t a particularly impressive photo, but when you consider this is the first time in about 4 years that I’ve had a clear path to the bottom of the garden, I’m pleased with myself!

More importantly, it’s a month today until my album launch. As of today I now have everything on CD, though some songs aren’t finished yet. It’s nice to be able to listen through everything in order though. If you ask nicely I might share the planned tracklisting in another few days… Right now I’m still planning to do a live streamed gig, though whether this will have to be in my own living room remains to be seen. If we’re allowed out by then I’ll sing in the studio. I’ve also started planning for a couple of promo videos, including one for the title track…watch this space!