Did you know its ginger cat appreciation day today? No, me either, but what a great excuse to introduce you to Max the Pirate Cat!

Max is the boldest pirate ever to set sail, and I’ve spent a whole year illustrating his story. The result is my new youtube video which I really hope you’re going to watch if you haven’t already. 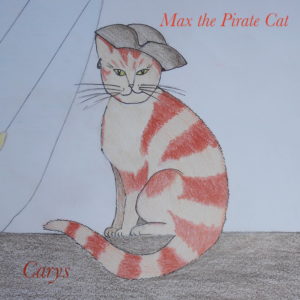 A whole year in the making!

When I first decided to make this video, I wanted to draw all the pictures myself. This was not going to be easy, because I’m not a natural artist (I got a D in art at school)!. However I AM very determined when I want to do something, so I found my old Lee J. Ames “Draw 50 Cats” book and got to work.

It was soon obvious I was going to need more help, so I enlisted the help of friends who posed for me and bought another couple of books, namely Polly Pinder’s “How to draw cats in simple steps” and Susie Hodge’s “How to draw people”. Armed with books, photographs and of course an internetful (is that a word? It is now!) of pictures of pirate ships, I got to work…

Very, very slowly! I decided to draw the pictures in A3 so I could include sufficient detail, but overlooked just how long that would take! Some of the close-ups of Max were finished in an afternoon, but others took much longer. The picture of the ships’ battle took three days! Others needed the help of my long-suffering housemate. who got used to my cries of “Can you photograph my head from behind/my feet/my hand holding this key?” at random times!

…and of course, the cats.

Because no less than 4 feline models posed for me. Firstly Hobnob, Daughter of Biscuit who says she’s delighted to have been my “Mews”. Buffy the studio cat and Fluffy Felis-Catus are quiet on the subject but Freycat has finally redeemed himself for last summer’s – ahem – incident! However he has currently renamed himself “Freycat the Longsuffering”. Apparently being released at the top of the stairs at least ten times in order to get a decent photo of the downstairs-departing rear end of a cat is most undignified! 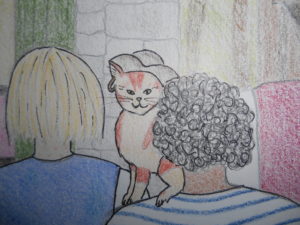 Finally, a huge thank you to David Wright for recording and mastering, Sophie Watson of Captain Morgan’s Rum Do for melodeon and Graham Bedford for the fantastic video.

Carys x
You can also download Max the Pirate Cat via my bandcamp page.