I’m starting this post with a disclaimer – Rosie who runs the Radical Songwriting academy has no idea I’m writing this. So this is entirely my own view on a very challenging but enjoyable week.

As some of you know I’ve had a rough couple of months mentally. With the new year, I’ve felt a lot more positive but hadn’t got into a songwriting mindset. So when I heard about Radically Authentic Songwriting’s 5 day challenge, I signed up immediately. I wasn’t sure what to expect but figured there would be some prompts and I might get a few song ideas out of it… After all, I have a day job so unfortunately couldn’t commit to five WHOLE days!

Yes, that does say Day Zero! Last Sunday evening Rosie did a live introduction in facebook live. She explained that at 10am each day she would do a love workshop and announce the theme for the day. She would then do a second facebook live at 7:30pm.  During this she would share six songs that group members had written each day. I admit, I was excited and also a bit apprehensive because realistically, I would’t be able to even watch the 10am workshop until nearly 5pm, giving me just a couple of hours to watch, digest, write, film and upload a brand new song! Could I do it..? 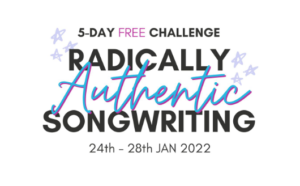 The theme of the day was lyrical vocabulary, and the prompt was a letter (I’m deliberately not sharing exact details because I don’t think it’s fair to Rosie who does this for a living). I immediately HATED the letter and DETESTED the prompt…which was absolutely marvellous! I write best when I have an emotional response to something, but I surprised myself by finding a chorus and bridge in under an hour. Filming and sharing what I had so far, I made myself a promise to write some verses, and was rewarded when Rosie shared “Say It Now” in the evening session!

Today’s theme was improvisation. After two full days at work I was feeling tired, so I was delighted with this prompt because I love improvisation. With a choice of three soundscapes, I opened up logic, grabbed my mic and recorded vocals to the sounds of a busy city! Not something I had ever considered doing before, but at the end of Day Two I had the beginnings of an interesting instrumental.

Bother! I woke up with head, shoulder and neckache, with added nausea. It wasn’t quite a migraine, but it was certainly migraine’s annoying lesser cousin. Still, I went to work and all would probably have been well if one of our teachers hadn’t been doing an A level experiment with phenols. Imagine you’re feeling sick and all you can smell is carbolic soap with undertones of TCP…well, it might work for you, but it certainly didn’t for me! Halfway through the morning I had to go home and head bedwards 🙁

Late afternoon, I woke up feeling more or less human again. A sensible person might not have decided to watch the songwriting prompt video for the day, but I watched it while I ate some toast. Day Three involved creative writing, or in my case, using an old facebook post as inspiration for a song. I’m not going to say too much about this one but suffice to say, I surprised myself by writing a complete song, and it’s probably going to be added to the “Max the Pirate Cat” series of songs. It features Max’s brother Jake and sister Lydia, the last two kittens to leave home, though they’re not actually named in the song. You’ll hear it at some point, I promise.

Then I was sensible and had an early night!

Hurrah! Woke up feeling restored and work was fine. I knew I was going to be on a tight schedule when I got home because I planned to go to the Half Moon folk session in the evening. Today’s theme was Letting Go Of Judgement. Judgement of one’s own songwriting, to be precise, so the song I wrote had the following restrictions:

We were allowed a total of 50 words (I took this to mean 50 different words) and two chords. One of these had to be a major chord… Oh, and an hour total to write a song.

In my case, I had less than an hour to write, film and upload the song…but I did it! I freely admit that what I uploaded was very rough with a delightful selection of experimental* notes.

For the first time I was able to watch the 10am video live, as it happened! Today’s theme was giving and receiving feedback and it completely terrified me. You see, I hate feedback on a partially finished song. A lot of people will offer feedback such as “you need to practise it more” or “your chord changes aren’t precise” because they’re giving feedback on what they’re currently hearing, not on what the song is going to be once it’s finished. So, once I’d had a good panic in the group and been reassured by Rosie and several other participants, I opened logic and started a proper recording of the song I’d created on Day 4.

I allowed myself an hour to progress as far as I could, then uploaded the track to soundcloud to share with the group.

Oh, go on then. I’m satisfied enough with this WIP that I’m willing to share it with you! Click here -> Masks

So here we are at the end of the week. I’ve got two finished songs ready to record. I’ve also got one WIP song and a WIP instrumental, and heaps of ideas too! I certainly couldn’t manage writing at this pace every week, but I’m very grateful to Rosie for the opportunity. Give me another couple of months and maybe I’ll be ready for round two!