The sound of a nose…

…or, Yet Another Album Update!

First, the really exciting bit – the album is actually starting to sound like an album now! We’ve finished nearly half the tracks and the rest are well underway. By this Sunday I’ll have been in the studio seven days out of the preceding nine and my car knows how to get there without any assistance from me. We’ve recorded most of the guest musicians… I’m sitting about three feet from an electric guitarist (see below!) as I write this! 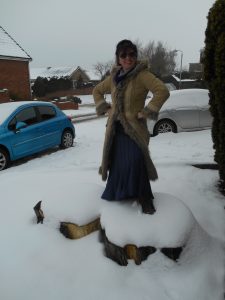 Last weekend was particularly fun thanks to the snow. I’d actually had 3 days off work (schools with a rural catchment are always the worst affected by snow thanks to the buses) and wasn’t completely sure I was going to get to the studio. But aside from a fun few minutes driving uphill on sheet ice, I made it..! We had a productive weekend, only slightly hindered by my communication issues. Sometimes what is totally clear in my head comes out wrong, or I can’t figure out how to say it at all. Which is why, when struggling to explain why I liked a particular rhythm section more than another, I eventually declared

“That part doesn’t sound so much like a nose.”

But you know the really scary part? David understood exactly what I meant!

So, that song sounds more like a nose, which I promise is A Good Thing, and everything else is coming on nicely. I shall have to end here because I spent an hour trying and failing to get wordpress to align the pictures. So here are some random photos of people who will be playing on my album: