You’re going to have to work pretty hard to beat 2017 in terms of music. I’ve performed in 4 different countries (England, Germany, Norway and the Netherlands). “Prophecy”, released in March 2017,  is nominated in the Schallewelle awards. Then the preparatory work for “A Different Kind of Normal” and the launch of my crowdfunder in November. All of which made for a pretty eventful year.

Then, the downside. I’m not going to go into details, but my ex partner has recently got a huge bee in his bonnet about some aspects of my life. Mainly, he is insisting to me and others that I don’t have Asperger Syndrome. Apparently I’m pretending to have Aspergers and doing it for attention. If I “really” had Aspergers I wouldn’t be able to get up on stage!

I’m thoroughly confused by this; I have no idea how his insistence that it’s not true would benefit him, and literally nobody else has ever doubted me. On the contrary, when I’ve told friends that I have Aspergers the response has generally been along the lines of “Yes, now tell us something we don’t know!” 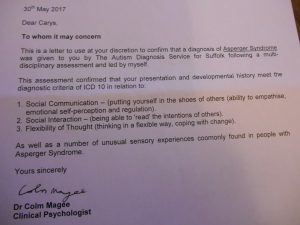 The thing is though, Aspergers doesn’t define me, it’s just a part of who I am. Yes, it means that I’m terrified of new places and I need to know exactly what’s going to happen before an event. Yes, it means that sometimes I have meltdowns and yes, I have been known to end up screaming on the floor when I get overloaded (unhelpful BT call centre operatives, I’m looking at you here!). And yes, I will sometimes stare into space for no apparent reason. Oh, and I am still listening even though I’m playing a game on my phone. I can probably repeat everything you just said back to me, word for word. If I had to look at you I’d be so busy concentrating on doing that properly I wouldn’t have enough energy left to listen.

But it doesn’t stop me from going places. It doesn’t stop me from going onstage, because it’s only a part of me, not who I am. It means I get to explore backstage at theatres in a way nobody else does. I see things most people wouldn’t even notice, and just because I’m terrified doesn’t mean I’m going to hide. Because the being onstage part is where I really get to be ME, and that energises me enough that if you’ve ever talked to me after a concert, in that 45 minute window after I come offstage, you might have assumed I’m completely normal. Hey, I might even have looked you in the eye while I was talking to you!

Mind you, catch me after that window of euphoria has faded and I’ll look as bloody terrified as if I’ve just been dropped off from my home planet with no hope of rescue..!

There was a point to this post. I just got a little bit distracted along the way. Right now I’m distracted by the annoying readability scores claiming that I’m using too much “passive voice” than the “recommended maximum”. Honestly, which twit sat down and said “we shouldn’t allow more than 10% of sentences in the passive voice; it’s too hard to read”? What sort of a human being reads a story and thinks “I’d enjoy this much more if paragraph three started with “This confuses me”?

Aaand…now I’m distracted again! I almost want to end here and thus I’ll have rambled gleefully for almost 600 words without ever making my original point. But no! Because…my crowdfunding campaign now has less than two weeks to run, and I’m less than £100 from reaching my target.

I’m so excited about this. Logically, when I started the campaign back in the middle of November I was sure people would back me. But I still get excited every time a new email notifies me that someone else is supporting me. Every single time, I’ve said “THANK YOU!” out loud as soon as I’ve opened the email. No matter the amount, it’s your support that means the world to me. If you’ve been meaning to back me, please make sure you do so before 16th January. That’s when my crowdfunder comes to an end, and I really hope it goes out with a bang!

Thank you (especially if you’ve read this far!). Here’s the link to “A Different Kind Of Normal”  where you can back me and get your hands on a CD or download…or a handmade card or lyric sheet…or even a concert! Wait…how can you get your hands on a download? And on that happy note of confusion I shall say…